Water hazards probably account for more penalty strokes than anything else in golf. But water hazards–as dealt with under Rule 26–often lead to controversy when interpreting the rule. So I’m careful to review the topic in my golf lessons and discuss it in my golf tips.

The controversy stems from interpreting where the ball last crossed the water’s edge. Since the decision affects where you take a drop, it makes sense to have a good understanding of the rule, especially if a match is on the line or your working on a personal best.

Golf’s rules define a water hazard as “any sea, lake, pond, river, ditch, surface draining ditch, or other open water course (whether or not containing water), and anything of a similar nature.” Courses mark water hazards with yellow stakes and lines. But the rules don’t stop there, as I mention in my golf tips and during my golf lessons; they also discuss a lateral water hazard.

The rules define a “later water hazard” as part of a water hazard “so situated that it is not possible, or is deemed by the committee to be impracticable, to drop a ball behind the water hazard in accordance with Rule 26-1b.” In other words, it’s a water hazard that doesn’t lie between the tee and the green. The course marks these off by red stakes or lines.

If you hit into water you do one of four things:

1.You can play the ball as near as possible to the spot from which the original ball was played.

2.You can drop a ball behind the water hazard, keeping the point at which the ball entered the water’s edge, directly behind the hole and the spot where the ball is dropped. There’s no limit to how far back the ball may be dropped, as long as the point of crossing lies between the drop and the hole.

3.You can play the ball as it lies in the water hazard.

4.If a ball goes into a lateral water hazard, you can drop a ball away from the hazard but within two club lengths of the point from which the ball last crossed the water. However, the ball can’t come to rest any closer to the hole than the point at which the original ball crossed the hazard.

A major source of controversy is establishing where the ball last crossed the hazard, not where the ball entered the water, which could be relevant in situations in which where a ball lands on the ground, then rolls back into the water.

The easiest way to deal with this type of problem is to determine the point where the ball was last on, or over, dry land, before it crossed the hazard. Next, determine if the point is between the red or yellow stakes. If it is, you can decide on the best course of action from that spot.

The additional dropping option for a lateral water hazard, however, means that the ball can sometimes be dropped on either side of the hazard, as long as it is within two club lengths of where the ball crossed the edge of the hazard and no closer to the hole. That can make a difference when you finally determine where to drop the ball. Unfortunately, no golf instruction can help you make that decision.

Hitting out of the water is rarely an option–and it’s not a choice I recommend in my golf lessons and golf tips–but it has been known to happen. Payne Stewart chose to play the ball from a water hazard during the final hole of his 1989 Ryder Cup Match with Jose Maria Olazabal. The attempt failed and he lost the hole and the match. Think carefully before choosing this option.

If a player chooses to hit from the water hazard, he or she can’t ground the club at any stage of address. Grounding the club may be unintentional, but it’s still a breach of the rules and subjects the player to a penalty–two-strokes in medal play and the loss of the hole in match play. The rule resembles that covering the grounding of a club in a bunker.

Knowing the rules governing water hazards won’t necessarily lower your golf handicap. But it will give you an idea your remedies next time you hit into the water. Since you can be penalized for violating the rules, think carefully before deciding. If you’re in a tournament and you’re confused about what to do, don’t hesitate to talk with officials. 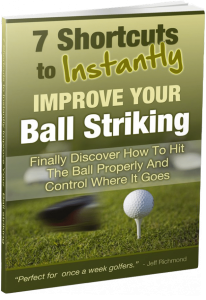